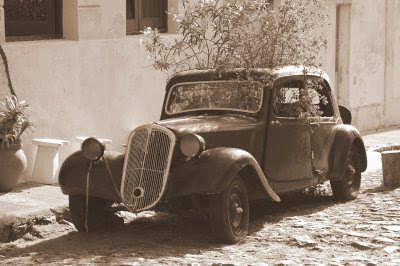 Spin, spin, spin. We have become about spin. Take, for example, this news that GM wants to restructure to give bondholders and the union-run health care trust 99% control of the company—to save taxpayers $10 billion dollars.

This new plan isn’t going to save the $15.4 billion that taxpayers—or rather, the government on our behalf—has given this company. That money is gone, forever. This “$10 billion savings” is the next handout that GM will ask for to continue past June 1.

And what is this about “equity holders” getting 1%? That’s more spin—and means that if you own stock common stock in the existing company, it would be…well worthless. For every $100 in GM stock someone currently owns—equity—it would be worth about $1. Then again, when bankruptcies and bailouts are concerned, “equity holders” often walk away with nothing but the capital losses they get to report on their 1099.

What is the other option? True bankruptcy. In true bankruptcies, courts oversee the distribution of equity to existing debt holders. Granted, GM’s debt to value ratio is non-existent. That’s what happens when you stop making money and become a business buoyed by socialistic governance.

And then there is the problem of the unions—those collective entities that served a purpose a century ago, when corporations abused employees. Unions were relevant when Ford would fire a woman who lost a finger on a die-cutting machine because of the injury (read, “The American Jitters” by Edmund Wilson).

Today—Unions have become, for the most part, the self-promoting monsters they unseated in corporate abuse. And yet, the union will still retain 41% stake in the “restructured” GM. Far from actually having to negotiate prices, pay scales, and benefits the way that most people do—their strike lines and power of sway would continue to derail this rail-less, and direction-less, company. Look at Delta Airlines—they aren’t much better off since their restructuring. As late as last June, Delta was still pursuing arbitration to come to agreement with their pilots union.

Given the option between the Michigan and DC, I chose Mississippi. There is a reason Russia got rid of its Czars. GM will restructure one way or the other—with taxpayer money, or union control—but in the end the bill will land in the same place. The citizens of the USA.

A century before unions, that had a different name: taxation without representation.
Posted by Unknown at 12:20 PM No comments: 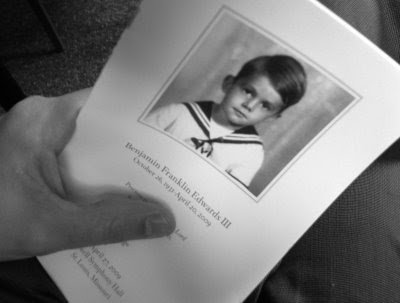 The rain was an appropriate backdrop for a funeral, and the gray of the sky reflected the black suits that filtered into the normally cheer-filled lobby of Powell Symphony Hall. I didn’t know Ben Edwards (other than brief passages in the hallways at church)—and from the laughs, smiles, and general good-spirits of the crowd, I wager most of these people didn’t; not personally, at least. They—not unlike me—were there for proximity, someone they knew or knew of, or heard about, and so on. Even throughout the funeral, most of the laughs sounded more like the release of anxiety at having to be uncomfortably close to death—not separated by a television or computer screen—while also listening to a preacher’s reassurance that (in not so many words) heaven is real, God is real, and Jesus is the only way.

Ben Edwards was the great-grandson of Albert Gallatin Edwards. A detailed history of the Edwards family can be found here. Suffice it to say, Ben followed in the footsteps of the generations before him—faithfully working in the investment company that his great-grandfather had helped build. AG Edwards (the company) survived the Great Depression, the financial shake-out of the early 1970s, and Black Monday in the 1980s. It even bypassed most of the derivatives collapse of the late 1990s. But what success could accomplish, it could not eventually fend off—growth by acquisition. Wachovia Bank managed to convince a majority of shareholders to sell the firm for $6.8 billion in May 2007. Edwards’ shareholders got $35.80 in cash, and .9844 in Wachovia stock—then worth close to $54. Just over a year later—Wachovia desperately accepted a $7 per share merger (read “rescue”) by Wells Fargo.

Today, with the rain falling, and no-so-subtle voices filling the lobby of Powell Hall—there isn’t much left of the Edwards’ name. AG Edwards is now Wachovia Securities. Come May, it will be Wells Fargo Advisors. At best, you can pick out an A, a G, and an E from that name (but not in that order). Along with the name has gone the wealth as well. From SEC declared holdings, the value of Ben’s Wachovia stock was reduced by 82% before Wells Fargo rescued the trouble Wachovia. And now, along with that, has gone his life.

Let the curtain fall along with the rain.

But that isn’t the whole picture, because the Edwards’ name does continue—and not just in the fledgling company that his son Tad has started. It honors on a house just off Ballas road—a house once owned by members of the Edwards family. A house that now is being developed into a gathering place for community leaders, for artists, and for Schaeffer Fellows—whose desire it is to compel a sometimes watching (sometimes sleeping) world of the reality of Christ and His Lordship.

The Edwards' name also marks a building at the campus of Covenant Seminary—a school the Edwards family helped to found and establish. Longtime support of the Seminary means that thousands of Gospel ministers have been trained thanks to the Edwards family. Ben’s name does continue—in India, with Paul Billy, a church planter who received scholarship during his studies at the seminary in the ‘90s. Ben’s name continues on in Brazil with Luciano Pires, in France with Nicholas Farelly, and in a dozen other countries where graduates serve, minister, and faithfully proclaim the gospel of salvation.

From a worldly perspective, Ben’s life ends in failure. Even the aforementioned link gets it wrong, predicting, “AGE celebrated its 100th anniversary in 1987, and it seemed quite possible that its 200th would be celebrated in 2087 by a young man with blond hair and boyish features named Benjamin Edwards VII.” There will be no 200th. There wasn’t even a 110. It doesn’t take much to lose the world’s favor.

And yet, when this world has forgotten that Ben died, eternity will remember that he lives. Ben has the inheritance that we all desire—an inheritance that can’t be bought (out), sold (short), or lost (on the gamble of derivatives and structured notes).

Listen to the Funeral Message:

Posted by Unknown at 8:12 AM No comments: