Another Take on the New Adventures of Old Indiana Jones 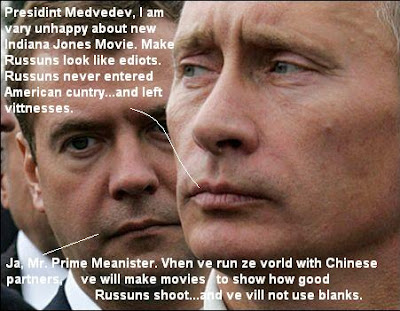 In generations past—information was linked to relationship. Communities were software—urgency and use are often in tension with expediency in what I commonly call the “specialization-conglomeration pendulum.” Software—like corporations, hospitals, educational institutions, etc.—goes from specializing in a given area—word processing, data management, contact management, spreadsheets, etc.—to conglomeration—multifunctional or by- and tri-functional programs (I’m not talking about packages).

As a user in the early ‘90s, we used a database, word processor, and spreadsheet creator. Then came the presentation software—Powerpoint—and then e-mail (or was that vice versa) and browsers, and then viewers—Acrobat—and now a whole wave of editors—photo, video, web, etc. Who says the classic “processor-database-presenter model” is the right one. Why can’t one program do all of these things?

Therein lies the problem. Microsoft tries to incorporate various features into their growing batch of basic software. MS Word functions as an HTML editor. My most recent version of Outlook links to a self-contained database. But I still go to Zoho.com to create forms and “surveys” for alumni. Why? Because Zoho is in a specialization area. They have some of the generalized features listed above, but they are focusing development on areas where the “Conglomerations” fail. In the end, such specialized companies will be a) acquired or b) copycatted by the Conglomerates. This in turn makes the Conglomerates less able to specialize on the development of a specific feature—like why I can’t right-click on a table in my possessor and have the option there of converting it “from table to text” right there (despite this being the most utilized function on my Table toolbar. This in turn creates new pockets of development and specialization.

As a user, I agree that buyers—e.g. IT departments —don’t understand the needs of users. Then again, they are often stuck trying to “patch” existing software for immediate use while waiting for the release of a newer version. It is why IT departments, when they can live in the tension between the “specialization-conglomeration pendulum” are one of the greatest resources of productivity that an institution or company can have. Then again, when the IT department doesn’t like tension, they actually perpetuate the problem.

Which is why so many companies are outsourcing their IT services. It’s easier to walk away from someone when they don’t fill an office in your company.
Posted by Unknown at 9:30 AM No comments:

The Cost of Inconsistency

“If it's ethically acceptable to use up and destroy fully human embryos with all the potential they have, how is it right to provide for hybrid embryos, with less potential of viability, greater protection?." –British MP Liberal Democrat Evan Harris.

Good question. If the potential for human life doesn’t have value, then neither does the potential for less-than human life? And so the birds come home to roost. For over 15 years, the West has legalized abortion. Should it surprise any of us that cross-species dabbling should seem anything but normal?

Harris is at the very least consistent—in a world where most people live in the center of contradiction. Ultimately, it will not be the legislators of permissibility who change the downward course devaluing human life—but rather people like Evan Harris and Peter Singer (with his applied ethics). Those who want to hold in tension some sense of moral rightness and practical contradictions, create the issues we now face. Give voice to Singer and Evans—let them yell that our contradictions are unacceptable and if human embryos can be mutilated for science, then why not mingled, mixed, and mutated?

It was Nietzsche who argued that the anti-Semitism of post-WW I Germany was a trapping of the old religion of man. Ironic that the most outspoken critics are those most radical in their position....
Posted by Unknown at 10:33 AM No comments: