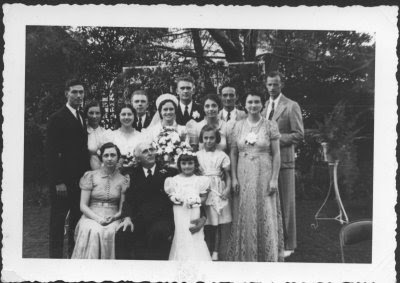 (Wilbur and Marie Wallis on their Wedding Day)

Wilbur Wallis is dead. A week has passed since his memorial service, but his memory still hangs on me like an albatross on the neck of the Ancient Mariner. I think, how unremarkable is the passing of great believers. It almost seems the greater the impact, the longer the faithful service, the deeper the Christian commitment and love—the more silently they pass into the night. How even the passing of CS Lewis was shrouded by the death of a President—and he slipped, that great man, beyond the curtain of glory, while all eyes were elsewhere. NPR tells me that two died in fighting on some distant plain, or that seven died with some new storm front. But the passing of one such as these gains what—the emptying of some nursing home room, the forwarding of last pieces of mail, and the disposal of papers kept for some reason unbeknownst to the living.

The white administration building is likewise on its final days, and stands now—more often than not—an empty shell of inactivity. I walk her empty hallways knowing that Dr. Wallis spent the better part of a dozen years in the confines of her walls—knowing that if I could just gather up the dust and decay from every decrepit crack, and regenerate that waste by science or speculation, I could birth again the ghosts of yesterday. But death has come, and mites have feasted upon the stray hairs of passed-away saints. Like the noble elephant in David’s memories (from Hemingway’s Garden of Eden)—it is a glorious thing in its massive size and animal defiance. But when the gun it put to its ear, and the repeating shots ring out in the surrounding forest, the elephant is gone—and only an empty mass of wrinkles remains. So too—whether in caskets or cracks—Wilbur is not here. The nobility resides elsewhere, and only wrinkles remain. Ashes to ashes. Dust to dust.

His brothers and sisters were there. They told stories about childhood—about Wilbur’s dance with death, and bare escape from Phenomena; how he walked 6 miles a day, alone, lumbering his 6-foot height with an easy gait. He was known for years afterwards to walk from Des Peres to the Seminary campus. I’ve walked that stretch of Ballas many times, and see how little the passing cars note my existence. Did they note his? In life, was he granted—at the least—that passing driving queried at this tall man of the disheveled hair, taken so often to the wayside? Or was he just another obstacle to avoid, something not to hit, to miss but not regard; to avoid but not acknowledge?

I remember my last visit with him—now nearly two years ago. He was praying when I came in. Dr. Wallis explained to me that there was a fellow resident at Friendship Village who mocked him whenever he spoke about Jesus. Here—this great saint of faithful years and heavy sacrifice, of theological battles and exegetical comprehension, treated by caretakers as little more than a needy geriatric—was untiring in his prayer for the lost, his compassion for their salvation; such that—when the rest of us had forgotten him—he had never forgotten his mission. Like the abandoned robotic WALL-E—faithful in his unending directive—this man was about the work of the King, the advance of His Kingdom, and the building and strengthening of His Bride.

To be like that. To be remembered like that—remembered for faithfulness when the faculties of body have failed, and the ability of recollection weakened; remembered for remembering even when I have been forgotten. God, let it be so.

The ancient mariner waits for the wind to blow again, and the empty administration building waits to see what redemption will bring. The grave stands ready to receive another—in that cry that never says, “Enough!”—and yet, with every fleeting soul to the side of the Savior, the curtain of heaven closes a little bit less. The glory shines out a little bit more. Glimpses of eternity pierce more regularly the monotony of days that, one upon another, fall. We will all fall. And while the world is distracted, looking left, I look right and see there another saint slip behind the curtain. Eventually, I think, heaven will be so full of those who have gone ahead that the sound and sight of it cannot be hidden from this world—and those who remain will walk a season as if in-between worlds—till Christ reclaims His own.

Soli Deo Gloria
Posted by Unknown at 8:27 AM

Very good, very important piece, very important reflections. The thing that makes me sad is that we (at CPC and CTS) have emphasized his life so much more regularly and emphatically than most of the saints who receive a glorious equal day's wage from the hand of our Lord in glory. I wonder if other folks who have lost godly family members feel if their loved ones' contributions were less. If only we praised the Lord as much at each death of a saint, and prayed for the comfort of all the left behind ones, as much as we have celebrated this life. Perhaps you can figure out how to get your reflections to Dr. W's siblings and children!! He is absolutely worthy of our celebration, and I enjoyed reading this.
Swh