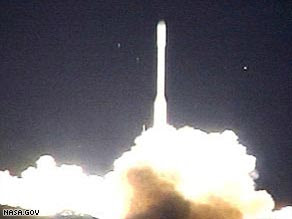 Maybe NASA and the auto industry should consolidate. Then, over-priced and under-performing vehicles of all types—terrestrial and extra-terrestrial—can be developed under one grand auspices. They could call it GANSAM—Generally Autonomous Nationally Sanctioned Aeronautics’n’Automobile Manufacturing.

Having witnessed—on the news, that is—the deaths of two entire space shuttle crews, I am grateful that this project was unmanned. And yet, there goes $273 million dollars. Clocking in at three minutes of flight, that averages US$ 91 million per minute. Not even Delta charges that much for its most expensive flights.

Thanks to the new Stimulus Plan signed into law by our President, NASA now has an additional US$ 1 billion, $2 million dollars--$400 million for the construction of a new space shuttle, $400 million for climate research, $150 million for aeronautics research, $50 million for the rebuilding of facilities damaged in 2008 floods, and $2 million to pay for the people who are going to oversee the spending of this money. I'm assuming these are the shovel-ready projects that we heard so much talk about--projects destined to save the collapsing economies in Ohio and the budget short-fall in California.

"We'll get back to flying at a pace that allows us to do so successfully," said Chuck Dovale, NASA Launch Director, at a press briefing after the failed launch. The project took 8 years to develop. Eight years and $273 million dollars! This wasn’t included in the new stimulus plan—intended for new research into climate.

Ironically, the very thing that makes NASA perpetually unsuccessful is the very thing that will keep GM and Chrysler from producing truly innovative vehicles. Governmental money for governmental projects return investment on capital well below the break-even point. Always. That is why so little privately-funded space exploration projects have gone forward. The knowledge that there is a regulating government body, that can carte blanche restrict or confiscate anything questionable to that broadly-undefined category of “national security,” and (dispensing with pleasantries) ignore budget constraints—is as much a barrier to entry as anyone needs.

Were the government to offer a contract in the sum of $1 billion to any private company capable of delivering regular payloads of satellite and human cargo, on schedule, safely, reliably, dependably, at a fraction of the cost—America would see a kind of innovation unparalleled in recent years.

As it is, we just got to see a $273 million fire-work display. That is, those of us who were watching.

The rest of you get nothing.
Posted by Unknown at 1:48 PM

As mentioned, intervention prevents innovation, to the tune of extended downturns, recessions, and depressions.

This from Doug Casey, "So technology and capital are going to solve the depression. But the government can do all kinds of stupid things to make it worse. Look at the Soviet Union. They suffered a depression that lasted 70 years from its founding. Look at China. The whole reign of Mao was one long economic depression. That could certainly happen in the U.S., too, where the government misallocates capital in such a way that technology doesn’t advance as it could and people can’t build individual capital the way they would."