Google any topic, click “I’m feeling lucky” and you are likely to end up at a discussion board, somewhere. And—whether the topic is financial planning and investing, home gardening, or how immunizations cause autism (or not!)—familiarity with discussion boards will quickly delineate comments into two groups: participators and posters (or, is that poser?).

Participators see themselves as part of a community, not only opining about some topic, but actually vesting themselves in the content of the discussion. There is a cost (gain or loss) to holding a particular view. And those views are acted upon. While the vast majority of infopinion the internet over is anonymous, disparate, and launched from a place of safety (i.e. there is no possible loss, error, or criticism linked to the to the opinion posted)—the greatest innovation, broadest transformation, and deepest impact of ideas and input is seen, measured, and felt when the random board pos(t)er becomes a participant. Any website can track the inconsequential numbers of page views or topic posts—but regular and recurrent participation is the stuff that turns random websites into social hubs. The posts of true participants are measured, not simply in regularity, but in depth of content and breadth of impact. Posts are proactive, sequential (if not also diverse), and grow from a place of informed certainty (if not also the possibly of being publicly wrong).

Pos(t)ers, by comparison, are those who surf the web—often in an aimless fashion. Their posts are reactive (rather than proactive), sporadic, and even a little spastically-psychotic. The key differentiation between pos(t)ers and participants is the possibility of loss. The possibility of being right in an unvested area, or being right in a vested area are one in the same. There is no shame in saying, “I think Google will increase in market share and market value,” not acting on that information, be right, and not be vested! That individual wins either way: he can boast of “being right” even if he can’t boast of the profits. But to say, “Apple (AAPL) will underperform the S&P 500 in the next year” (a position I publicly took a year ago!), not act on that information, and be wrong—whether one is vested or not—is a great risk. Either I risk money or my reputation or both. Either way, true risk must be measured in the possibility of loss, not the possibility (or reality) of gain.

And so random pos(t)ers will always stand outside the realm of real risk. If they opine on a topic, and are wrong, nobody knows who they are. There’s no possibility of shame. If they never invest, never vote, never buy, never practice, never participate—there is no possibility of loss. And what loss may really occur will never be observed. Pos(t)ers can spread opinion without accountability. I call them posers because there is a form and shape, but no substance.

This hit me acutely with a recent article comment thread at the Motley Fool financial site. On one article, one user posted three responses to an article (back to back), all within 1 hour. There were no other comments. Each responses focused on one stock mentioned—Sirius (SIRI)—and each increased in incredulity. A click through to this users “profile” revealed him/her to be a poser: zero stock ratings, zero board postings, zero profile updates, no stocks liked, etc. In short, his profile was blank (see below). 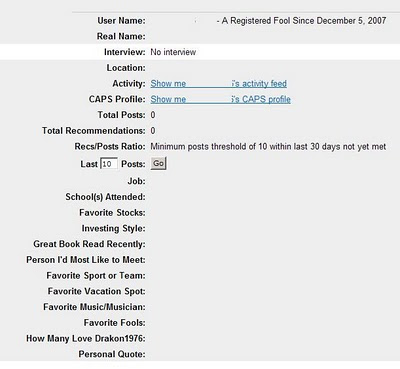 Note that pos(t)ers may be long time “account holders” at the places where they randomly show up. For example, this particular pos(t)er has been a Motley Fool (MF) member since 2007. (This fact reveals why we should be suspicious of companies that measure success in metrics based on “user length of time.”) By comparison, note the profile of a true participant (see below): 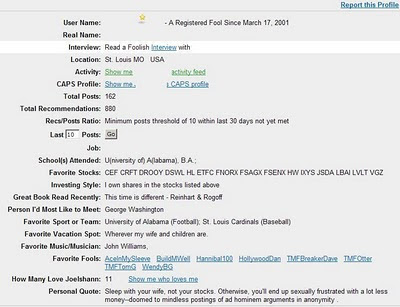 There is depth, commitment, and risk: the risk of being wrong with (in this case) favorite stocks, or with opinions taken on posts. There is also the risk of losing a great deal: of time, money, respect, recognition, and influence. These are not cheap or easily replaced. And yet, when there is true risk of loss, the benefits of reward—over and above the prospect of simply being right—is immense.

So is there anything that a company can do to move pos(t)ers to participants? First, participation needs to be rewarded. Loyalty is a value that drives the revenue of extremely successful business models. Companies can reward participation through a variety of value-added content and/or savings (e.g. resources available only to participants, scaled with increasing opportunity or discount based on level of participation). Companies can also recognize participation—allowing that certain metrics must be attained before comment recognition is allowed.

On the other hand, companies can generate a user-peer based model for participation, akin to MF. Peers can measure the weight of comments by posers based on a variety of things (cumulatively): length of membership, number of board posts, number of stocks rated, percentage of profile complete, and number of positive ratings per post.

This level of transparency is essential if we are to differentiate between participants and pos(t)ers. In reality, this is very hard. The weight of one comment can be disproportionate to the trend of a discussion or argument, until the level of participation is revealed. Then, it becomes clear who is a spastic pos(t)er and who a true participant. And, to be honest, most users are both pos(t)er and participant—though the level of each varies from forum to forum.

What do you think? Are there ways you differentiate between posers and participants? What else can companies do to move users along the scale from posers to participants? If you are a chronic pos(t)er, why? If you are a recognized participant, how would you leverage that position?
Posted by Unknown at 10:38 AM