Before you Say “I Do,” Check Your Gun and Bullet-Points At the Door (Forever!) 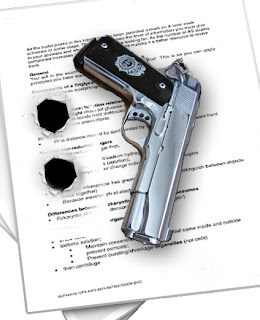 In a short story titled “A Touch of Petulance” Ray Bradbury tells the story of a newlywed man who meets a version of himself from 25 years in the future. The older version of himself tells him that he’ll kill his wife in 25 years, that she’ll drive him insane with her petty whining. In the end, the older version gives the young man a gun wrapped in crumpled up newspaper, and leaves. The young man goes inside to his new wife and Bradbury writes, “Her voice. Wasn’t there just the tiniest touch of petulance there?”

Murder by Bullet-Point
None of us is likely to meet ourselves from the future, but all of us have the chance of ruining our marriages. Few use bullets, but most of us are prone to compile a bullet-point list of concerns and complaints. For most, it starts small: a rather innocuous list of benign suggestions for change. We suppose humility open to correction in others that we often lack in ourselves, granting to the perspective of the outsider, all the while remaining blind to our own offensive ways.

Over time, the bullet-points become bullets: verbal demands fired uncaringly at the recipient of our promises of constant faith and abiding love. Suggestion become expectation. Requests become requirement, and there is at least truth if not love. We forget that the most important change is incremental.

The Marriage IPO
Marriage isn’t an IPO, though I think we expect it to be. With Initial Public Offerings (IPO) of a company, we hope to buy in before the boom. Get a piece of Facebook or Twitter. Marriage is more like a start-up company. IPOs are about filings and disclosure and the promise of initiatives. Start-up companies are about funding, development, promotion, and placement. IPOs are those companies that have proven they can do it, at least for now. Start-up companies are those that will demand a lot of work, take a lot of time, and—even then—might not survive.

But like Yoda said, “Always emotion is the future.” Those start-up companies that enter IPO usually—not always, but usually—have been sustained by the passion of commitment and the certainty that what they have to offer is worth the sleepless nights, the anxious days, the uncertain funding, the setbacks, and conflicts, and the disappointments.

People say, “Christian’s shouldn’t be so down on marriage. They should be those who talk most about the blessings of marriage.” Yes, marriage is a blessing, the way an IPO is a blessing after years of hard work. There are payoffs at every level: from “out of the garage” to “buying the Washington Post.” But if you enter marriage expecting an IPO value pop instead of a start-up, you’ll never make it. You’ll never work to make it work.

Traveling in Time
So take a time-travel trip and find that start-up guy saying “I do” and ask him what’s on the bullet-point list. Scour your mind and intentions to discern what you’ve added to it. And when it’s complete—totally, completely, complete down to the nail clippings and the harry tub and the dirty dishes and socks—throw it away. There are divine powers at work in the strongest marriages, but many unspiritual people have had successful marriages. It requires checking your gun at the door, and your bullet-points too.

Joel Hathaway
Posted by Unknown at 11:08 AM No comments: